A personal interpretation with some spoilers…

After watching Rogue One and reading over  F 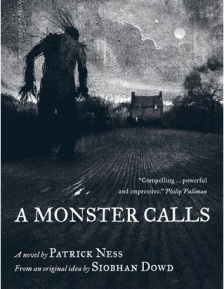 elicity Jones’ other roles, I came across, A Monster Calls. I was intrigued by the plot and listened to the audio-book. I don’t often watch tear-jerkers on the big screen, however, my interest in the book, persuaded me to see the film.

A Monster Calls, by Patrick Ness, is a doleful yet beautiful tale and film that describes the emotions many people go through when losing a loved one. The movie was slightly altered to give more detail to the main character and his immediate family. It wasn’t particularly suspenseful but it gave closure. The book was brief, so it helped that the film could fill in gaps and bring the book to life.

The audience is dropped into thirteen-year-old Conor O’Malley’s ritualistic world as he gets up, prepares breakfast, and goes to school. His parents are divorced, and with his mother’s illness, Conor learns to be self-reliant. His mother is in the late stages of cancer and is taking potent drugs to battle the disease, leaving her debilitated. She is progressively getting worse, though they remain optimistic through experimental drug treatments.

Conor’s reality turns into a recurring nightmare of him trying to save his mother from a sinkhole. He is already withdrawn from reality, and to add to his stress, the nightmare leaves him with exhaustion and anxiety. One evening, as Conor begins to drift off, an old yew tree across from their yard comes to life, headed straight to his bedroom. Initially, Conor is terrified and believes it is an extension of his nightmare but learns the tree is only there to tell him stories.

The yew tree tells three tales and Conor must tell the fourth about his nightmare. The condition is Conor must tell the truth. The first tale is about a beloved prince who loathes his evil stepmother who is a witch. The second is about a stubborn apothecary who prefers to use herbs for cures and refuses to conform to modern society. The third is about an invisible man who just wants to be seen. The common thread in the stories is the yew tree, who helps the characters in some way. The tales slightly resemble Conor’s life. His grandmother takes over the care of Conor and his mother. They are both distant to one another and find it difficult to agree. He learns that one of the drugs is an extract from a yew tree developed to treat cancer. Later he confronts a bully that has been tormenting him at school. Conor expects the tales to end happily but soon realizes that the they are not. It takes the three tales and the progression of the cancer for him to finally come to terms with his own truth.

The book and film portrays Conor’s torment as a nightmare bleeding into reality. He tells himself and others that his mother will turnaround and become well again, and chases any thought of her dying away. However, a small part of him wants the nightmare to end. Conor holds all his emotions inside and the yew tree is a manifestation of those suppressed feelings. The tree helps Conor to realize he cannot hold them in, otherwise he risks his own destruction.

The film brings the yew tree to life and the interaction between the tree and Conor are believable. The film also adds more background to his family. Family photos explain some of the details about his mother’s childhood and relationship with her own father who passed away when she was young. It also follows Conor and his father, who has a smaller role in the book, as they go on father-son day trips. The film added vivid imagery to the dream-like world.

In my own experience, it took me six months to overcome my own sadness and guilt of my mother’s death, though not entirely. Although her death happened in a matter of days rather than weeks, I could empathize with the main character. Watching a movie that reminded me of this made me realize that it is important for me to have moments of sadness as well as bliss. The author understood those dark moments leading up to death and the emotions expressed in these horrible situations. The film conveyed this to me: that we all must deal with our own monsters and that we all want a happy ending. Realistically, life is terminal. In order for us to cope with the outcomes, we must confront those truths no matter how awful, sad or painful they may be.

End of semester, end of 2016 and seeking warmth without the cost of a tropical getaway, I ventured with my significant partner to Shawnee National Forest in Southern Illinois. It was mildly warmer considering we live in Wisconsin. We decided to go winter camping, because I gifted us with a new ALPS tent, that required testing. We set out from Oswego, Illinois on a 5 hour drive heading south.

For anyone who has driven through Illinois, Illinois offers plenty of flat topography … (yawn). This all changes once you descend upon the forest. The winter weather stripped the trees of their foliage, but it unveiled the rolling landscape. There is a very geological reason for this.

Where Illinoian glaciation stopped is where The Garden of the Gods begins. We set up camp along a backpackers trail. The temperature peaked around 40⁰F during the day but dropped to the 20s as night fell. Unfortunately, the wind picked up, making it impossible to enjoy the campfire. Fortunately, for us, we wore extra layers and brought lots of sleeping bags.

After surviving a windy night in the new tent, we hiked the Garden of the Gods Observation Trail. It was an easy trail, but it does get more challenging depending on how adventurous you are. I was not daring enough to climb up or down rock formations, although some hikers were. These numerous unique sandstone formations or hoodoos provided breathtaking views of the forest.

After driving on some of the back roads, we finally found a few waterfalls, Jackson and Burden Falls. Burden Falls was the smaller of the two as Jackson Falls was the highlight. It had a steep drop-off that we did not hike down to, but was still impressive. The falls provided a natural soundscape of the forest. The weather was ideal (jeans and sweatshirt were sufficient) and the areas we explored were not crowded for seasonal reasons.

Some important notes: anyone can set up camp for up to 2 weeks for free in the forest.  There are plenty of trails to explore, as well as a cave, but we didn’t have time to explore.  I also found that there were plenty of restrooms.

Though we spent only a day exploring, it was enough to make us want to come back during warmer seasons. One peculiar sighting was a cryptid statue and (maybe?) someone  we might encounter next time.